Judging by reports in The Triangle, Hanover students did not demonstrate against the war much in the 1960s or 1970s. Students expressed their concern about the war but focused on conflicts with college administration, objecting to dress codes and required assemblies, for example.

The shootings at Kent State University did inspire student protest however.  The tragedy at Kent State began when President Richard Nixon announced that U.S. forces would invade Cambodia as part of the effort to defeat communism in Vietnam. Those who opposed the war in Vietnam were appalled at its expansion into Cambodia; even people who had not previously protested the war began to do so in 1970.  Kent State University was one of hundreds of colleges and universities where students staged protests against the expansion of the war.   On May 4, 1970, the National Guard, called in to disperse the crowd, opened fire on the students.  They killed four people and injured nine others. In a similar confrontation between authorities and students in Jackson State University, Mississippi, two students were killed. Throughout the country, students responded with public denunciations of the war and the tragic shootings. Some schools cancelled graduation ceremonies, and other schools incorporated formal protests into the graduation ceremonies.

The May 8, 1970, issue of the Triangle opened with a large cartoon of Uncle Sam pointing a revolver at the reader. The issue included several articles about the Kent State shootings, including the ones reproduced below. -smv

Seven Hanover students protested the war in downtown Madison Wednesday, headed by junior Barb Beale, head of Hanover's mobilization committee. They spent a silent vigil against the Vietnam war outside the Selective Service office. A typical sign of a philosophical nature carried by the protesters was "In war, truth is the first casualty." The protest was in connection with the Anti-Draft Week sponsored by the National Mobilization Committee.

Future plans of the committee include: Paul Mack of the Beaver 55 Support will talk on "Civil Disobedience" at 7:30 p.m. Sunday at the JGBCC; and also a peace fast for April 13-15, including a peace train and vigil at the Madison Post Office in regard to income tax forms. 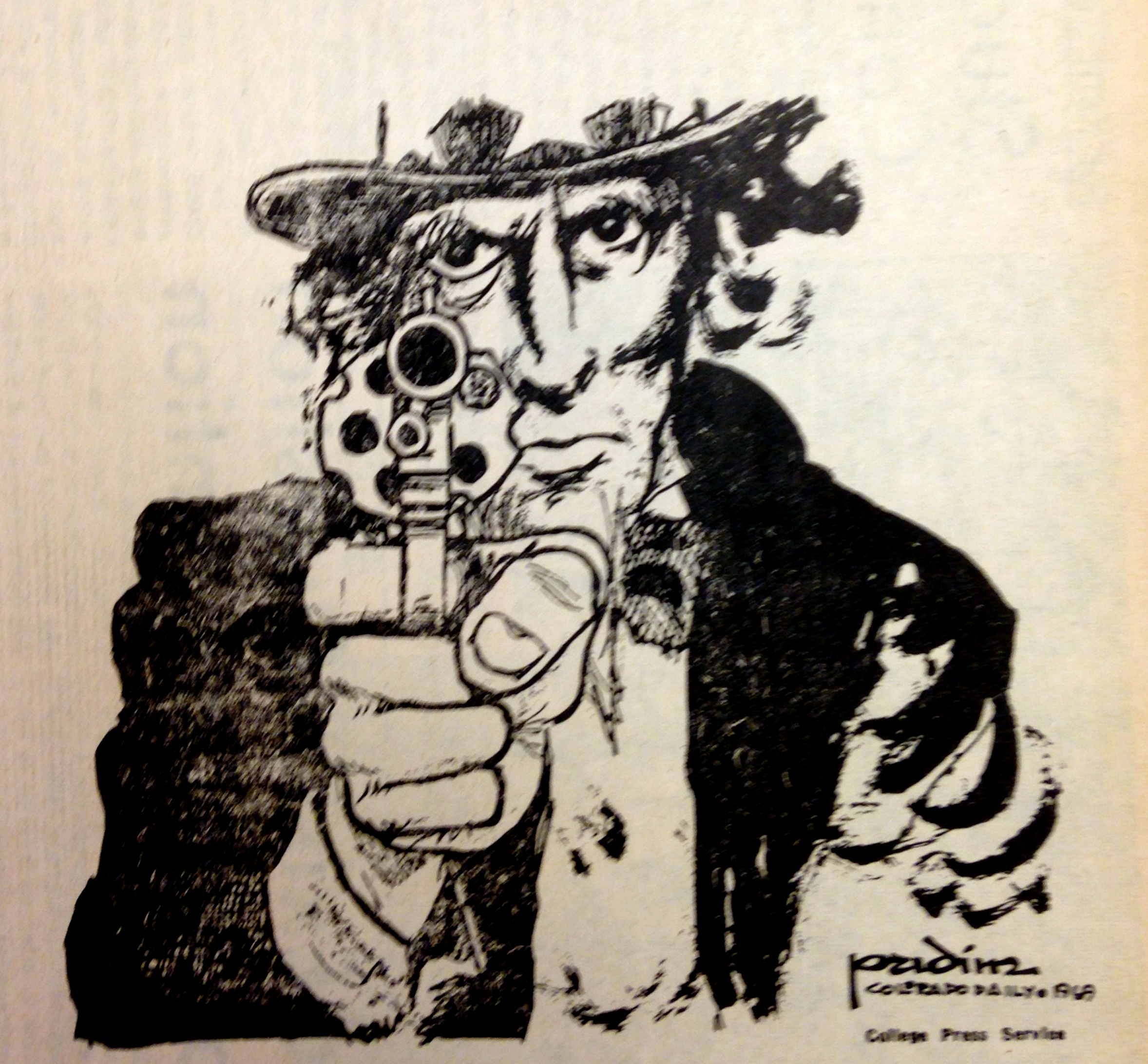 Hanover's reaction to the incident at Kent State and the recent move of American troops into Cambodia was vividly expressed last night by a capacity crowd of students and faculty listening to peer group speakers advocating means of expression.

Senior Hunt Prothro started the discussion by reviewing the tragedy at Kent Sate and the action taken by students at several other colleges and universities. Protho went on to state that certain students had prepared letters to Kent State President White, the Adjutant General in command during the riot, the student body of Kent, and the people of Kent.

As each letter was read to the crowd, various opinions were expressed from dissenting members. Although Sophomore Jo Lynne Warfield's letter to President White seemed to be well received, Lee Mann's letter to the Adjutant General will not be sent at the request of one listener who felt a letter to the Governor or State Legislature would be more effective. Senior Steve Jones' letter ended by asking, "If indeed a president of a university or a country has split that body asunder would we as students continue to tear at that wound or start to heal it."

An all day strike did not receive wide support and a suggestion by Senior John Burlew that students go to their classes, and then show their concern by attending discussion classes during their free hour was well supported by applauding listeners.

Dr. Ralph Calkins, economics professor, read a letter that he intends to present to Indiana State Senator Vance Hartke on Saturday concerning his feelings on the recent actions at Kent and in Southeast Asia. Calkins also indicated he would be happy to present any other letters students might want to have read.

A list of professors and rooms in which they will speak today was read and will be posted on the Classic Bulletin board. Various teachers and students expressed their own views and a representative of Western College of Women explained a proposal for a boycott on cosmetics, beer, liquor, records, and other college supported products. The aim of the boycott is to "show the people of America how strongly we feel on these issues.

As the meeting adjourned, students donated over $60 toward purchasing material and postage in order that the four approved student letters might be sent to all state university presidents and Governors.

Following the meeting, some students cleaned up the multi-purpose room, as others went to get paper and typewriters to prepare the letters. Steve Jones announced that Senate President Mick Davis had expressed the hope that Senate would vote to provide funds for mailing and might vote to support the letters at a special meeting to be held Monday.

At the last of the discussions, listeners left the multi-purpose room and one girl turned to another and said, "This reminds me of last year when everyone got together over the Judicial system." The other girl answered, "Maybe - but let's hope not."

Student Spring exhuberance struck on college campuses this week. The death of four students shot by National Guardsmen at Kent State University, Ohio has left the country sick with shock.

The reason for this recent student madness can be attributed to another type of madness; the madness demonstrated by Richard Nixon's action of moving troops into Cambodia.

For too long, Hanover students have been out in the woods on major concerns of this country and the world. The time is growing short, though, and we may find ourselves in a burned out forest. Every student should make an effort to let others know how he feels. Nixon must change his priorities.

We had better start to worry about the war just as much as we do about student rights. Every student comes to school to gain skills for a profession in which he can freely operate. However we don't deserve this opportunity unless we get out of our halls and houses and actively work to keep our system as it was originally intended. The only name left for those who remain quiet now is, "parasite."