If you had been a Hanover College student in 1880, you could have taken a horse and buggy over to Madison to see Frederick Douglass in person!  He stopped in Madison that year while making a tour of Indiana in support of James A. Garfield, the Republican presidential candidate.

If you were a Republican, you might have marched with the Garfield Guard, dressing up in a snappy military uniform to provide Douglass with  a parade escort.  If you were a Democrat, you might have been among the crowd lining the streets, including "women, boys and girls," who mocked the Garfield Guard by "tearing out their windpipes for Han -n-  -n- cock," the Democratic candidate.   Either way, you would look forward to someone the local newspaper called "the Greatest living Colored Man of the age."

By the time you reached the speakers' platform, near where the Broadway Fountain is now, the sound and smell of fireworks and colored lanterns would have added to the excitement.  Douglass could not make himself heard over all the noise, but he promised to speak at a quieter indoor location inside the Court House.  That prompted the crowd to surge down Main Street (then called Main Cross Street), everyone trying to get ahead of the others to find a spot in the Court House.  Douglass was famous for his oratory, and if you had gotten one of the available seats, you would understand why -- the crowd's "enthusiastic cheers" for what the newspaper called a "powerful speech" showed how impressed they were.

(Note the Hanover College advertisement that appeared near the stories about Frederick Douglass -- the college was officially "open to both sexes" for the first time that fall.)


Hon. Frederick Douglass and "Private" Dalzell arrived on the noon train and are the guests of the Western Hotel.  A large audience will greet them to-night. 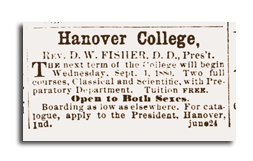 
The Garfield Guards will escort the speakers to the stand on Broadway to-night, where the speaking will be. - - In this connection we shall mention the fact that there is a difference between a popular torchlight procession and a uniformed escort.  The Guards will receive the most of our speakers without calling upon other citizens to turn out in procession.  When we desire to make a popular demonstration torches will blaze over about a thousand voters in line."

All uniformed officers and men of the Garfield Guards will assemble this (FRIDAY) evening, for escort duty.  Companies will assemble at the same time and places designated in General Order No. 2. 
Frederick Douglass was sumptuously entertained by Walter last night after the speaking at the Court House.  Walter gave the old man a splendid spread.

The stampede for the Court House last night, after Fred. Douglass decided to go there to speak, was an animating scene.  The throng rushed up Main Cross like a wave on the living sea, and the Court House was packed and jammed with people eager to hear the speech.

When the Garfield Guards turn out and parade the streets like civilized citizens it is crushing to them to have women, boys and girls, tearing their windpipes for Han -n- -n- cock.  If those who do the yelling only know how awful it made the Guards feel they would button their lips.

Mr. Fred. Douglass and Mr. Fred. Harper had a very pleasant conversation yesterday, growing out of the fact that when Mr. D. escaped from slavery he belonged to Captain Thomas Auld, of St. Michael's Talbot county, Maryland, who married an aunt of Mr. Harper's.  They had quite a talk about the past, and Mr. Douglass expressed himself pleased with the interview, as he liked to meet with persons who are acquainted with his origin and history.  Mr. Harper reminded Mr. Douglass that his old master used to say that he (Mr. D.) exhibited remarkable mental brightness and activity from early youth, but was physically lazy.  Mr. Douglass laughed and said it was a fact, but added that but very few persons labored physically more than they were compelled.  Mr. Douglass is now sixty-five years old.  Captain Auld died a few months ago in St. Michael's at the residence of John C. Harper, aged eighty-four years.

Another Grand Rally!
An Outpouring of All Kinds of People,
To See the Parade and Hear Dalzell and Douglass

At the appointed hour last evening the Garfield Guards rallied, and the Battalion formed on Broadway.  The parade was made upon Main Cross between Walnut street and the railroad bridge, and the Guards attracted the populace by their fine marching in their uniforms, with lamps trimmed and brightly burning.  The Battalion broke ranks on Broadway and joined the multitude of people who surrounded the speakers' stand near Trinity Church.  The stand was decorated with flags and illuminated with Chinese lanterns, and as the crowd assembled rockets, Roman candles, and red and green lights pierced the darkness with their brilliancy.  Hon. Frederick Douglass was so fatigued, and the open air had so affected his voice, that he did not attempt to speak at the stand.  Hon. J. M. Dalzell was introduced by Mr. M. C. Garber, Jr., and made a brief but earnest and telling speech.  There was not an old soldier present who heard "Private" Dalzell but felt the force of his appeal to them for the points he made were supported by events of the war and attitude of the two parties since the boys in blue came back to peaceful homes.

Mr. Frank Anderson introduced Hon. Frederick Douglass, who excused himself from speaking in the open air, and invited those who desired to hear him to repair to the Court House.  It is needless to state that the auditorium was soon filled to its capacity.  The venerable hero was greeted with enthusiastic cheers on his appearance, and during his speech, for his voice came to him and he spoke with his wonted power.  To every man who has not become blinded by prejudice, the appearance of Mr. Douglass is impressive.  He has arisen from a condition of servitude in early life to the altitude occupied by the foremost statesmen and orators of the country, and as the representative of a people who toiled under the lash of a Southern Democracy he stands before the world - - self-educated, intelligent, eminent - - as proof that his race were worthy of the freedom given it by the Republican party.  His speech last night was a powerful one.  It contained so many convincing, logical points that any attempt to synopsize it would be futile with our limited space.

We congratulate the Republicans on the success of last night's demonstration, and look forward to other victories.  Let the good work move on till it assumes the gigantic proportions and the irresistible force of a tidal wave!

A number of youths have organized in the East End under the name of Garfield Juveniles.  They have elected Johnnie Wood, Captain, and Charlie Rea, Lieutenant, and have written to a firm in Cincinnati in regard to procuring uniforms.  Suffer the boys to come unto us, for of such shall the country be saved in the future.

The Garfield Cadets composed of young Republicans of Madison, made a fine display on the reception of Hon. Fred. Douglass and Private Dalzell last night.  Their uniforms are neat and show to good advantage.  They march with the regularity of veterans, which proves that officers and men take a pride in being well drilled and orderly and they deserve credit for their manly bearing."


Special Dispatch to the Enquirer

Madison Ind., September 10.  The Republicans to-night held an open-air meeting on Broadway.  Speeches were delivered by Hon. Frederick Douglass and Hon. J. M. Dalzell, of Ohio.  The speakers were escorted to the place of meeting by a battalion of uniformed Garfield Guards, making a very creditable display.  The meeting was a very large one, composed of both Democrats and Republicans.

When Douglass spoke at other Indiana towns, his experiences were similar.  In Indianapolis, the "immense crowd" was too big for the original location, and latecomers had to be satisfied with an "auxilliary meeting" nearby.  In Lafayette, he drew the biggest crowd of the year, and his speech "incited a great deal of enthusiasm."  Although he appeared as part of a political event, "a large number of those present were prompted to attend out of mere curiosity."  Douglass's address in Pendleton was especially memorable because of his experiences there as a young man.   "On the platform were seated several Indianians who had seen Douglass mobbed and left for dead on that very spot thirty-seven years ago. . . .  As Mr. Douglass referred eloquently to those events of far-off days his audience pressed forward, unwilling to lose a word, and there was scarcely a dry eye in the crowd.  What a change in less than a half century!" Frederick Douglass, c. 1875 (from the Library of Congress).