(excerpted from a print edition)

(N.B. Paragraph numbers apply to this excerpt, not the original source.)

{1}While beautiful and elegant penmanship gives evidence of taste and skill, business writing may be said to sway the world! Easy and graceful in its proportions, it is as attractive as it is useful. Plain to the eye, conveying thought with electric speed to the reader's mind, its perusal gives genuine satisfaction to all to whom it is addressed.

{2} Men in the world of commerce, who transact business daily with those who are known to them only through the medium of letters, involuntarily form opinions based upon the character of the writing of their correspondents. If it is firm, free and legible, it inspires a well-grounded confidence in the general ability of the writer, and gives an assurance that he will do well whatever his hand finds to do.

{3} It will be observed that among the best business writers, there is a manifest preference for the most simple forms of capitals; and that they usually commence the initial curves of words well below the ruled line, and extend terminating curves above the hight of short letters, this being more in accordance with the natural motions of the hand. It will also be noticed that a's, p's and other small letters are frequently modified, d's are looped, and y's and g's at the end of words are terminated without loops by a simple downward line, or an easy curve leftward.

{4} These are not faults, but features which adapt writing more fully to business use. Swiftly must the pen glide in these days of steam and electricity; for, however rapidly the agents of modern progress move, the pen must ever pave the way.

"Teaching in Commercial or Business Colleges"

{5} In the majority of commercial schools, two general writing lessons are given each day, during the spring and summer months, occurring upon the programme the first hour in the morning, and the last in the afternoon. In autumn and winter a lesson is given from seven to nine in the evening, and one of the day lessons is discontinued. There being no vacations, pupils may enter at any time; hence the classes are composed of those of nearly all ages, and in various stages of progress.

{6} Each lesson should be conducted with a view to improvement in some special feature. Whether it be slant, shading, the formation of certain letters, or a class of letters, spacing, or any other point, all the copies for that lesson should be arranged especially for it, and the teaching should be full and earnest.

{7} In order to give the students confidence in their ability to execute, and to enable them to write well independently of copies, the teacher should occasionally dictate commercial terms, sentences, forms, figures, &c., requiring them to be written in proper form and order, and at a fair rate of speed.

{8} Good penmanship requires an easy, convenient, and healthful position. Many persons, however, disregard this fact, and, in many schools, a position is allowed which is detrimental, not only to good penmanship, but, if long continued, to good health also.

{9} There are four positions which may be properly assumed, and each is correct according to circumstances. They are: The Left, The Right, The Right Oblique, The Front.

{10} There are some general directions which apply to all these positions. The body, for example, must always be in a position nearly erect, - - near to, but never leaning upon or touching the desk. The feet must have a direction corresponding to the slant of the letters. The hands must always be at right angles to one another.

{11} The Right Position. This position requires the right side to be placed near to the desk, but not in contact with it; the body to be erect, and the left foot advanced until the heel is opposite the hollow of the right foot, and distant from it two or three inches. The right arm should be parallel to the edge of the desk, and rest upon the muscles just below the elbow. The hand should rest upon the nails of the third and fourth fingers. The left hand must be at right angles to the right, and rest upon the paper or book, which should be kept parallel with the edge of the desk. Great uniformity may be attained in training pupils to maintain this position.

{12} In this position, never let the left hand drop down, but use it constantly in holding the book and assisting to steady the body.

{13} This position is illustrated in the drawing of a boy seated at a desk. 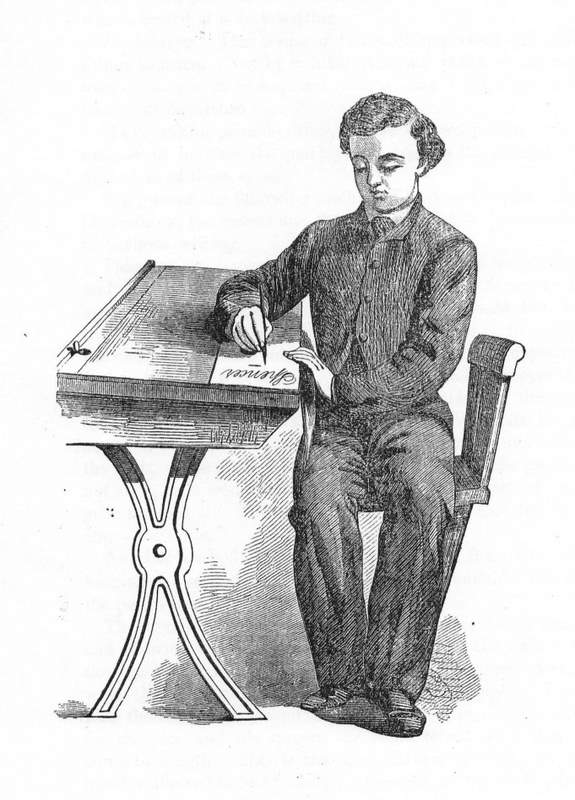 {14} The Front Position. This consists in sitting directly in front of the desk, keeping both sides equally distant from it. The book or paper should be at an angle of twenty degrees to the edge of the desk. The hands must be at right angles to one another.

{15} This position is illustrated in the drawing of the lady who is seated at a desk writing. 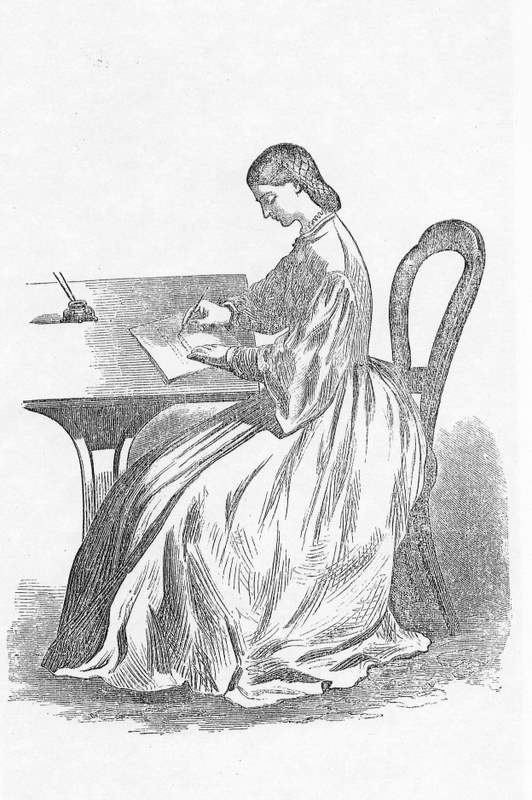 {16} Penholding. This is one of the most important and difficult things to learn. Yet by a little care and patience the correct manner may soon be acquired, and, if once fixed, there is little danger of departure from it.

{17} We present the following method of holding the pen, it being, as we think, the easiest and the best adapted to long-continued or business writing.

{18} Take the pen between the thumb and first and second fingers, and let the holder cross the first finger just forward f the knuckle joint. The end of the second finger should drop below the first, so that the pen may cross it at the root of the nail, and the end of the thumb should press upon the holder opposite the first joint of the first finger. The first and second fingers should touch each other as far as the first joint of the first finger; the third and fourth must be slightly curved and separate from the others at the middle joint, and rest upon the paper at the tips of the nails. The hand will then glide easily over the paper, and not stick, as it would be apt to do, if the fleshy part of the fingers touched it. The wrist must always be elevated a little above the table.

{19}Principles are the constituent parts of letters. Of these there are eight.

{20} Only the first four enter into the composition of small letters; while the last four are prominent as the characteristic features of the capitals, the others being combined with them.

{21} The First Principle is simply a straight line, slating to the right of the perpendicular, forming an angle of fifty-two degrees, with the horizontal line. This is the regular slant for all written letters.

{22} The Second Principle is the right curve, so called because it appears in the right side of an oval figure.

{23} The Third Principle is the left curve, so called because it appears in the left side of an oval figure.

{24} The small letter I is one space in hight, without the dot, and, as before stated, is the standard of measurement for the hight of all letters. It begins on the ruled line with a right curve extending upward one space, where it is joined angularly to a slanting straight line, which descends to the ruled line, uniting in a turn with a second right curve. This curve is similar to the first, and, ascending one space above the ruled line, completes the letter. The dot is made by placing the pen at the hight of one space above the straight portion of the letter, and on a line with it, pressing gently upon the point, as if to begin a downward line, and then removing it quickly.

Return to the History Department.